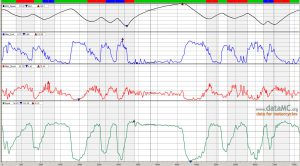 One important aspect of motorcycle setup, especially as bikes become more powerful, is how the suspension reacts when the motorcycle accelerates. As we have discussed previously in the section covering front and rear weight, load transfers during acceleration and braking and acts to compress or extend the suspension. This load transfer causes the bike to “squat” to the rear under acceleration, and in an extreme example, all the weight can transfer to the rear wheel in a wheelie.

The amount of squat determines geometry – rake and trail – at different places on the track, which in large part is what gives the handling feel of the bike to the rider. By putting a number on squat, we can make changes to achieve a desired value at different tracks or in a particular corner. Squat is defined as:

Squat can be affected by a number of variables, including spring rate, preload and damping. Softer fork springs, for example, will give less squat; softer rear springs, more squat. Changing damping settings will affect how quickly the bike pitches forward and rearward, and will change the squat values at different parts of the corner. Additionally, and especially on more powerful bikes, anti-squat plays a big part. Anti-squat is the tendency for the rear suspension to extend due to the chain pulling on the rear wheel and the rear tire pushing the bike forward; this will be explained in more detail in the next post.

Squat and Anti-Squat (Inside Motorcycles)