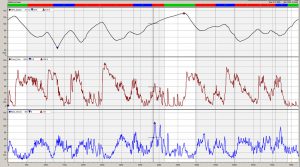 Figure 1. Suspension data for a lap at Atlantic Motorsport Park in Shubenacadie, NS. Speed is shown in black, front fork travel in red, and rear wheel travel in blue. A zero value for suspension travel indicates the fork or shock is topped out, while a greater value indicates more travel.

In a previous post, we discussed the importance of using high-quality suspension potentiometers and properly calibrating them to accurately measure front and rear wheel travel. Here we will talk about basic position data and how it can be used to pinpoint handling problems.

However you have installed your potentiometers and related their position data to actual wheel travel, always ensure that your data stream reads zero for fully topped out, and positive numbers for more suspension travel. After any suspension work or removal and installation of the pots, be sure to re-zero them so you have consistent data that can be compared from day to day or track to track. It’s also worthwhile to know at what point the suspension bottoms or encounters a bump-stop. At the rear end, you can measure the shock’s overall travel and the thickness of the bump-stop, and calculate from there the available suspension travel. Another option is to remove the spring and monitor your data in real time while you fully compress the suspension.

Many inverted front forks bottom internally before the seal or outer tube contact the lower casting, sometimes giving the false impression that more travel is available. It’s best to remove the spring and reassemble the fork to see where it actually bottoms for an accurate measurement. Note also that most forks have a hydraulic bump stop preceding a hard stop at the very bottom, and you will need to know both measurements.

Typically, the front suspension will be near maximum stroke under braking, while the rear suspension will see maximum stroke under acceleration. That said, a particularly bumpy track will work the suspension in other areas and the suspension may bottom even along a straight section. The important distinction to note is that, if the front suspension is bottoming under braking or the rear under acceleration, you will definitely need to address that in the setup. However, if the bottoming is occurring in a section of the track where it’s not affecting the actual handling of the bike – for example, in a dip on a straight – it may be an acceptable tradeoff is making a change will have a negative effect on other aspects of the handling.

Figure 1 shows some typical front and rear suspension data using AiM’s Race Studio 2 software package. You can see at a glance where the suspension is reaching maximum travel and how close it is to either the bump-stop or actually bottoming. For example, here, the front fork reaches maximum travel of 130mm at about the 2500-foot mark, just at the beginning of a braking zone. On this particular bike, that is bottoming, and some changes would be necessary to correct this. On the rear suspension travel, the maximum is reached at about the 3900-foot mark. GPS data not shown here indicates that the bike is on a very hilly straight section rather than exiting a corner, and the high suspension loads are due to a dip in the track. Additionally, the maximum travel used is well clear of bottoming the shock absorber; here, the maximum travel and where it occurs are acceptable.

This data also indicates that the fork is topping out on acceleration. The machine in this case is a 1000cc superbike, and the track is very hilly and short; this leads to almost constant wheelies and the fork topping out. Further investigation would involve looking at lean angle data and lateral acceleration to determine if the topping out is occurring at inopportune times. On the rear shock, there is some topping out under maximum braking. Here the rider would have some input to determine if this needs attention, but other data (for example, deceleration slip) would help to indicate if changes are necessary.