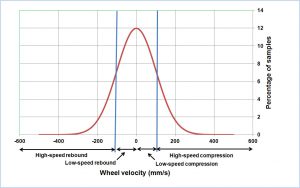 One very useful technique for suspension setup is to use histograms and suspension velocity analysis to evaluate spring and damping settings. Histograms put values to how much time the suspension is active in each damping range (high-speed and low-speed compression and rebound damping), and by using some basic statistical analysis techniques, that information can be used to make spring and/or damping adjustments to the motorcycle and improve its performance.

Histograms, as we have discussed previously, are a way to display data in terms of distribution. The histogram splits the data into segments covering a range, and displays how many or what percentage of the data points fall into each range. For example, a histogram can be used to divide the engine’s rev range into 1000 rpm increments, and show that the engine spends 20 percent of its time between 14,000 and 15,000 rpm during a lap. Or a histogram of throttle position can be used to show that the throttle is fully opened for 35 percent of the time over a lap. In terms of suspension, here we are concerned with vertical wheel velocity, and how that data is spread over the range of wheel velocities based on time.

Much of the material covered here is derived from Jorge Segers’ book, Analysis Techniques for Racecar Data Acquisition. This book is an excellent reference for suspension analysis, although it covers cars rather than motorcycles; practice shows that this distinction is significant, especially when it comes to histogram analysis.

When we refer to suspension damping, there are four zones, or segments, to be considered. Damping is divided into compression or rebound (as the suspension compresses or extends) and those are each divided into low-speed and high-speed (where “speed” denotes vertical wheel velocity and not speed of the motorcycle itself). The four zones, then, are:

Wheel velocities can be found by taking the derivative of the wheel position data, and because we are interested in very high wheel velocities (to evaluate high-speed damping), suspension position data must be sampled at a high rate – typically a minimum of 200 hz, and preferably at 500 hz.

An “ideal” histogram of suspension velocity data is shown in figure 1. Here the chart shows wheel velocity on the x axis, and the percentage of samples (in effect the amount of time spent) in each range. Positive velocity values denote compression of the suspension, while negative values are used for rebound. This histogram has an ideal bell-shaped curve, with an equal amount of samples in compression and rebound and more samples in the low-speed segments than the high-speed segments.

Here we have split rebound and compression into high- and low-speed zones, as marked across the bottom of the example. The most important information from the histogram is the total percentage of time in each zone. Most software analysis packages will provide this summary, showing results such as:

Note that the values sum to 100 percent. In a theoretically ideal setup, the high-speed compression and rebound numbers are identical, and the low-speed compression and rebound numbers are identical. In addition, ideally the front fork and rear shock histograms would be identical, with the same numbers in each zone. Figure 2 shows some sample data from AiM’s Race Studio 2 analysis package. The software automatically analyzes suspension position data and outputs the histogram and summary percentages. 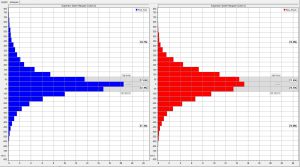 In working with the histograms, we must set a transition point between low-speed and high-speed damping. In both examples here they are set at 100mm/s of wheel velocity; this value is not cast in stone, however. In the car world, suspension velocities are well-defined as far as where the high-speed/low-speed transition occurs. But for motorcycles, the transition is not at one set point but rather over a range. So, for example, a low-speed damping adjustment could affect the histogram (and suspension action) at more than 100mm/s, but a high-speed adjustment could affect performance at velocities well below 100mm/s.

Another difference between bikes and cars are the maximum wheel velocities obtained. In the automotive world, velocities of more than 200mm/s are seen only as the car goes over curbs, but for motorcycle data we often see values greater than 800 or even 1000mm/s. The maximum value for suspension velocity for analysis should be set to at least 500mm/s in order to include the bulk of the data. Again, this is not cast in stone, and some experimentation with typical data will show that increasing the maximum value beyond 500mm/s affects the important values very little.

In a theoretically ideal suspension setup, we are looking for a symmetrical histogram with a bell-shaped curve, with identical histograms for the front and rear suspension. This means the time value for front low-speed rebound is equal to front low-speed compression, and front high-speed rebound is equal to front high-speed compression. In turn, those values are equal to the rear time values in the same zones. What should those values be? A good starting point using a high/low-speed threshold of 100mm/s would be an equal distribution, with equal time in all four zones. The histogram values  for both the front and rear suspension would be, then: 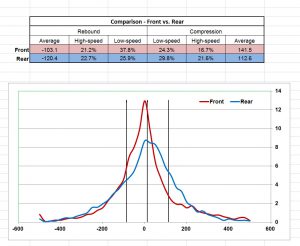 Figure 3. This Excel chart shows sample velocity histograms for the front and rear suspension overlaid for comparison. The table above shows the percentage of time spent in each zone.

There are a number of suspension adjustments that can be made to affect the histogram to approach these ideal values.

In practice, such as shown in the sample data used in figure 3, the ideal histogram shape and distribution values may not give the ideal suspension setup, as there are many factors to consider. There may be some differences between the front and rear suspension, or discrepancies in the values of each histogram. For example, a hard-braking rider may require more than usual front compression damping, which would affect the shape and numbers of the front histogram. This is the case in figure 3, with the front suspension showing distinctly more high-speed and low-speed compression damping (lower percentage values) to cope with hard braking.

While the “ideal” histogram shape does not necessarily translate to the perfect setup in practice, the histograms do provide useful information and can provide input for suspension adjustments, especially when combined with feedback from the rider.