When analyzing data you will almost always want to view it by distance rather than time. For example, looking at speed over the course of a lap based on how far around the lap the motorcycle is by distance, not time. This is not such an issue when dealing with one lap in isolation, but when comparing two or more laps it’s always best to base the graph on distance, not time. 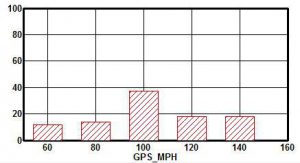 A histogram breaks down the data into intervals and displays how much time the data spends in each interval. This histogram shows speed, but the format is especially useful for looking at channels such as throttle position or rpm.

Another useful way to display data is using a histogram, which is a graph of the channel versus intervals of that channel. For example, a speed histogram can show how much time the motorcycle spends in each interval of 10mph. Any data channel can be shown in histogram form, and it is especially useful for quickly determining, for instance, how the powerband of the engine is being used in an rpm histogram. Histograms also play an important role in suspension analysis.