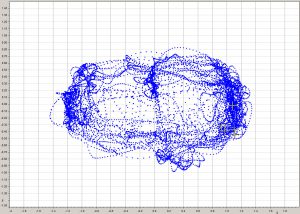 Figure 1: This G-G plot shows longitudinal acceleration vs. lateral acceleration, and is one way to see how well the rider is using all the available traction. The ideal G-G plot would have all its data points clustered about the perimeter, indicating the rider is always accelerating, braking or cornering as much as possible.

Earlier we discussed the G-G plot (an X-Y plot of lateral and longitudinal acceleration) and the traction circle and how it combines the two acceleration values into an easy-to-read format. The G-G plot, shown here in figure 1, graphs the two forces combined for every point on the racetrack and is useful for a quick evaluation of the overall lap. Ideally, the plot would consists of points only on the outer edge of the traction circle, with no points filling the graph – in other words, the rider is always using the maximum traction available by accelerating, braking or turning at any given point on the racetrack. On the G-G plot, this measure of how much traction is being utilized – usually called Total G – is viewed as how far the point is from the center of the plot and can be calculated by summing the lateral and longitudinal accelerations using vector addition and the Pythagorean theorem:

To picture vector addition, imagine going from your home to the nearest Starbucks. You can walk three blocks north and four blocks west to get there, but the total distance is five blocks as the crow flies – do the math yourself, substituting the distances for the accelerations in the formula above. In terms of acceleration, we can add .3 g of lateral acceleration and .4 g of longitudinal acceleration for a total of .5 g. Note that the equation is similar to that of a circle with a radius of the maximum total acceleration (just as you can picture a five-block radius from your house). 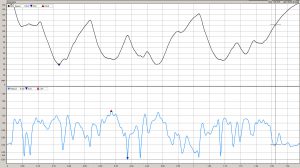 Figure 2: This data shows a full lap of Auto Club Speedway, with speed in black and the total G data shown in blue. Total G represents the vector sum of lateral and longitudinal acceleration, and is a measure of how far from the center of the G-G plot the current data point is.

The Total G math channel shows just how close the rider is to the edge of the traction circle at any given point over the course of a lap. Figure 2 shows a lap at Auto Club Speedway with GPS speed and total G displayed. 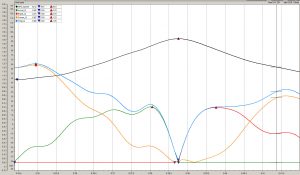 Figure 3: A portion of the same lap shown in figure 2, with additional data: braking G in red, acceleration G in green, and corner G in orange. At the 35-second mark, the rider is accelerating out of a corner; corner G is decreasing, and acceleration G is increasing. Note how the total G trace (in blue) joins the two peaks. At the 40-second mark, the rider is braking into a turn; as braking G decreases and corner G increases, total G again joins the two peaks. Ideally, the total G trace is a flat line at a maximum value, dropping to zero only in the transition from throttle to brake (at 38.5 seconds) or when the bike reaches top speed.

Areas of concern here are the dips that are not related to a transition or straight, such as at 13 seconds or 30 seconds, where total G dips below 1.0 g for an extended time under braking.