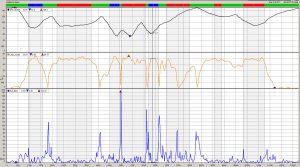 Figure 1: A lap of Willow Springs International Raceway, showing speed (black), lean angle (orange) and roll rate (blue). Spikes in the roll rate data indicate transitions from full lean to full lean, while in long corners roll rate should be at a minimum.

While it’s possible to see from the lean angle data how quickly the rider makes transitions and how well maximum lean is held in long corners, it’s much easier to see graphically and put numbers on that data by using a math channel. This channel is the derivative, or rate of change, of lean angle, and shows roll rate in degrees per second. We know that lean angle (Φ) can be approximated from lateral acceleration data as follows:

Your software package should have a derivative function to find roll rate, either available within a math channel, or as a separate type of channel. Note that if you used, an absolute value function in your lean angle channel to keep that data always positive, taking the derivative of lean angle will yield incorrect results; roll rate will go from very high negative to very high positive numbers in transitions. Here it’s best to use the raw lateral acceleration data in the derivative function, and take the absolute value of the result to keep all roll rates positive. The AiM math channel, as an example, is:

Where abs() is the absolute value function, deriv() is AiM’s derivative function available within a math channel, and GPS_LatAcc is GPS lateral acceleration. the 180/PI factor converts the radians result within the atan function to degrees, and roll rate is in degrees per second.

Figure 1 shows a lap of Willow Springs International Raceway with lean angle and roll rate data. Note the spikes of data at each transition, indicating high roll rates as the motorcycle is transitioned from full lean to full lean. Note also that the maximum values are inversely proportional to speed; as speed increases, it becomes more difficult to turn the motorcycle and roll rate decreases. Many factors contribute to roll rate and it is difficult to state a specific goal for maximum roll rate. However, the spike shown here in the transition between turns 3 and 4, at about 5,000 feet, is very good at 200 degrees per second.

Another useful property of the roll  rate channel is that it shows how well the rider holds a steady lean angle in a turn. At Willow Springs, turn 2 is a very long, fast corner, shown here from approximately 2,000 to 4,000 feet. Roll rate is below 10 degrees per second through most of the corner, showing the rider is keeping a consistent lean angle. In contrast, note the portion of the track between turn 4 and 7: Here, the transition between turn 4 and 5 has a double spike, and roll rate in the turns is somewhat high. Both these characteristics represent some uncertainty on the rider’s part.