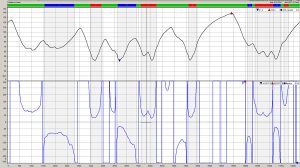 Figure 1: The radius channel, shown here in blue, graphically depicts the rider’s line through a particular turn. The vertical lines indicate radius is approaching infinity – in other words, the motorcycle is going straight and not turning.

With most GPS-based systems we know lateral acceleration and velocity, and by rearranging the above formula can calculate a value for the turning radius:

The formula’s result will have to be multiplied by a constant to account for the units used; with velocity in mph and lateral acceleration in g, multiply the result by .067 for radius in feet, .020 for radius in meters. Figure 1 shows a lap of Spring Mountain Motorsports Park in Pahrump, Nevada, with speed in black and radius in blue. Note that if you use the raw GPS lateral acceleration channel, radius will be positive for right-hand turns, negative for left-hand turns, and this does introduce some clutter in the graph. If the motorcycle is traveling in a straight line, lateral acceleration is zero and the radius approaches infinity; this is seen in the occasional vertical lines on the graph. At various points on the graph, radius goes from negative infinity to positive infinity as the rider slightly from left to right and back. at times, a multitude of vertical lines can be seen as the rider weaves down the straight.

The complete math channel using AiM’s format as an example is as follows:

Where GPS_Speed is in mph and GPS_LatAcc is GPS lateral acceleration in g; the 0.02 correction factor gives radius in units of meters. 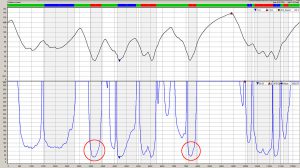 Figure 2: Adding an absolute value function to the channel removes the clutter and makes the graph easier to read. However, some information – such as how much the rider is weaving down a straight – is lost with this change.

While the graph is less cluttered and easier to see, the vertical lines in figure 1 are sometimes useful. For example, we can see if the rider weaves excessively on a particular straight. Or if the rider hesitates with the bike vertical when making transitions, as sometimes happens.

The radius data gives an almost visual representation of the rider’s line through a particular turn. In a long turn – for example, the first two turns shown in these graphs – the flat section of the radius trace shows the rider keeps a near-constant radius through the entire turn, as desired in this case. How steeply the trace descends from vertical indicates how quickly the rider is turning into the corner. In fast turns, a motorcycle cannot be turned as quickly, and the radius trace tapers down to the minimum radius value. In slower turns, when the motorcycle can be turned quickly, the traces are much steeper.

The radius channel can be used to see at a glance how quickly the rider makes transitions or bends into a particular corner, as well as how well the rider holds a line in a long turn. Some of this information can also be seen in the lean angle channel, but the radius channel has an important difference: since speed is included in the calculation, the channel graphically takes that into account, making it easier to see differences between faster and slower turns. Additionally, it’s possible for a rider to keep a constant lean angle but a non-constant radius by changing speed, and this makes it far easier to pinpoint areas of concern when the radius channel is used.

One other useful use of the radius channel is that it can show if the rider is using late-apex or early-apex lines in the corners. In figure 2, the two red circles at about 3500 feet and 7500 feet show the typical shape of a late-apex radius trace; the tightest arc (lowest radius) is offset slightly to the entry of the corner, indicating the rider made a wide entry and made the apex of the corner closer to the exit. The opposite shape, with the lowest radius offset to the exit of the corner, indicates an early apex. Looking at the rider’s habits over several laps, and combining this information with sector times, can give an idea of which line in a particular corner is quickest.