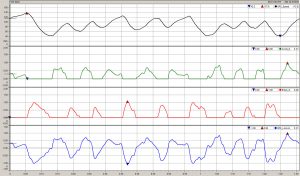 Two channels can be generated by dissecting the longitudinal acceleration channel into its positive and negative components. The first channel, which we will call Acceleration G, shows only the values for positive longitudinal acceleration – when the bike is what we commonly refer to as accelerating. The second channel we’ll call Braking G, and shows only the values for negative acceleration – when the bike is decelerating, or braking. Here, the braking forces will displayed as positive values rather than negative. The real value of these new channels is that it is much easier to visualize braking and acceleration as separate, positive channels, rather than looking only at longitudinal G. Additionally, separating them into two distinct channels makes it easier to use the data in other math channels.

These channels are calculated as:

Here, the max () function refers to the maximum value. Your software should have this function; if not, the channels can be generated using some math and the abs (absolute value) function, or some creative addition and subtraction.

The attached chart shows a lap of Mazda Raceway Laguna Seca with the longitudinal acceleration broken down into these components.  Speed is shown in black. As we have discussed before, it is difficult to determine much information at a glance from the longitudinal acceleration (blue) trace on its own; this is mostly because it has both positive and negative components, and many software packages do not clearly show the zero axis. Split into its two components for acceleration and braking (green and red, respectively), it is much easier to see at a glance how much the rider is accelerating out of each corner or braking into each corner.

Now it is much easier to see maximum values as well as how quickly those values are reached. For braking G, it is also useful to see how braking tapers off through the braking zone and as the rider arcs into the corner. These traits give the acceleration G and braking G channels their characteristic shapes, and we can also use additional math channels to put values on that information and better compare data from lap to lap.