There are many ways to combine lateral and longitudinal acceleration channels to gather information. The most common view – one that shows an overall picture of both channels – is an X-Y plot. This graph displays at a glance several important characteristics that are very difficult to see using a standard graph format. 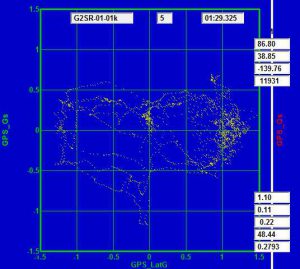 Figure 1 shows a typical X-Y graph of lateral (X) and longitudinal (Y) acceleration for the same data used in the previous sections. This graph is sometimes referred to as a G-G plot or traction circle. Most software programs will generate the graph, but it’s easy enough to export the data and create the graph in Excel, just as we did for the speed/rpm X-Y plot. Ensure that the GPS channels are employed for the graph, and not data from the unit’s internal accelerometers. Points in the upper half of the graph indicate acceleration, points in the lower half represent braking (negative acceleration). Points on the right half indicate right-hand turns; the left half, left-hand turns. We can quickly see maximum and minimum values of each channel.

The main benefit of the X-Y plot is that it shows combinations of the two accelerations. For example, a point in the lower right-hand quadrant indicates trail braking into a right-hand turn. A point in the upper left-hand quadrant represents accelerating in a left-hand turn. The shape of the graph tells how much trail braking the rider is using, or how hard he is accelerating while leaned over exiting corners. A more diamond-shaped chart would indicate fewer instances of combined accelerations (less trail braking, for example) than a more circular chart would.

Figure 2: These two X-Y plots are for two different riders, but on the same track and motorcycle. Note the differences in the charts for each rider.

In a perfect world, the X-Y acceleration chart would be a circular shape. A motorcycle (or car) tire is capable of generating a maximum amount of grip in any direction. That grip can be utilized for lateral acceleration, longitudinal acceleration, or any combination of the two – provided the vector sum does not exceed that maximum value. For example, you can use the entire available grip for braking; start to lean into a corner, however, and you have to release the brakes to free up some of the total grip for cornering. As will be explained in a later section, the lateral/longitudinal relationship gives rise to a circular pattern for the X-Y plot; hence the name traction circle is sometimes employed.

In the real world, however, the X-Y acceleration chart is heart shaped. The motorcycle typically cannot accelerate as hard as it can brake, flattening the top half somewhat. Maximum braking occurs while the machine is vertical, giving a small tail to the bottom of the chart. And maximum acceleration occurs when the motorcycle is slightly leaned over, completing the heart shape. The last characteristic is due to several factors: When the motorcycle is leaned over, the tire’s smaller circumference shortens gearing slightly. The tire’s contact patch is somewhat larger just off center, resulting in more traction. And the center of gravity is slightly lower, lessening the tendency to wheelie.

Figure 2 shows two more X-Y plots, for two different riders on the same bike at the same track as shown in Figure 1. The chart on the left is for a slower rider, the chart on the right a faster rider. Compare the three charts, and note the differences. Clearly the fastest rider is using more lateral acceleration in the corners, as well as more trail braking. The chart is almost empty in the middle, indicating no instances of coasting. That said, note that the slower rider’s chart indicates harder braking – a potential trouble spot given the rest of the information.